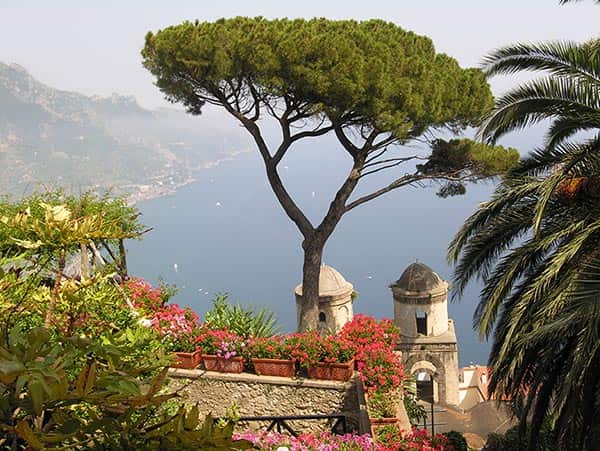 Ravello is definitely one of the most attractive and romantic destinations for the tourists visiting the province of Salerno on a yearly basis.
he town of Ravello is famous all over the world as a music place with two major events: the Ravello Festival and the Chamber Music Concerts. Every year the Ravello Festival offers a particularly rich program of concerts, ballets, movies and exhibitions.
Indeed Ravello is a jewel in the crown that fascinated lots of artists including the composer Richard Wagner, who was inspired to write the Parsifal amid such an awfully beautiful landscape.

Built in the sixth century, around the year one thousand, it was populated by a group of nobles from the Maritime Republic of Amalfi who rebelled against the authority of the Doge. Ravello was chosen because of its strategic location on an easily defensible position, right on the top of a spur separating the deep valley of the Dragone river from the Reginna, on the southern slopes of the Lattari Mountains, overlooking the sea. The town quickly became prosperous, in particular thanks to flourishing wool treatment activities, once called “Celendra”, which King Charles II granted to the Bishop Giovanni Allegri on 23 April 1292, and to the agriculture. The extensive trades along the Mediterranean routes, especially with the Arabic and Byzantine populations also contributed to the development of the town. Episcopal seat since 1086, Ravello reigned as a powerful town even in the following century. Suffice it to say that at that time it already had a population of 30,000 inhabitants. In 1137 Bernard of Clairvaux defined the city as “ancient, highly armed and impregnable, as well as opulent, it is so beautiful that it can be easily considered among the first and most noble cities.” The development of Ravello is strictly linked to the town of Amalfi. However, the economic and political decline began during the Norman era and became dramatic over the seventeenth century. Afterwards, Ravello was able to maintain its reputation as it can be now admired: a site of unparalleled natural beauty replete with art treasures dating back to the golden centuries.